You know, sometimes it seems that the current movement of web development has already crossed the borderline between a simple human creation and undertaking of the true divinity. Nowadays, with the all manner of startups, open sources, innovative web technologies, you think that it’s hardly possible to develop anything even more ambitious, but nevertheless, there’s constantly appearing impressive things that really amaze us. So does with Drupal CMF. This content management framework is considered to be the giant of endless flexibility together with the robust features. Today, being the #1 solution for creating high security websites, it’s pretty curious for many people to know the very first steps of Drupal. So, let’s trace back to the beginnings of Drupal supremacy.

Well, if we had reproduced the path of Drupal development in a way it would be in the time of World Creation, the inception of Drupal era would have begun from the big bang. Initially, the first splashes of this content management framework shoot were projected at the message board creation.

Dries Buytaer originally wrote Drupal CMF as a forum for his friends, and we should realize that it was the time when there were just little opportunities for such things. At that stage Drupal was used as a communication tool for monitoring the group’s rather delicate internet connection. 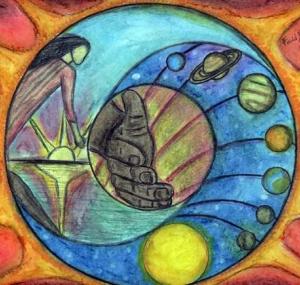 The next stage of Drupal’s finding feet covered the idea of allowing people to create and run news websites, where the status of friends communication was a little bit closer comparing to the primary level of development. The second day was the day of Drupal logo creation. In accordance to the Drupal scale, the founders were thinking about something that would render Drupal as a convenient utility that would provide you with the friendly atmosphere.

So, Dries thought about “Dorp” name, which means the Dutch word ‘village’ in English. But, nothing of the sort! The fate of Drupal popularity and working scale has been already distinguished by the stars. Dries made a typo “drop” and thought it sounded much better. So, to fate of being a drop in the ocean was overlooked for Drupal content management framework.

On the third day of Drupal enhancement interest to this CMF was boosted significantly when it was used as the basis for ‘DeanSpace’ for Howard Dean’s campaign, who was one of the candidates in the U.S. Democratic Party. That was a revolutionary web project that allowed all users to communicate with each other, add their feedbacks on the campaign. Drupal became so-called a go-between as well as was introduced as the high-potential web innovation.

With the end of political campaign, Drupal ‘DeanSpace’ project was smoothly transformed into CiviSpace. Within the spaces of this project, Drupal was used to promote Firefox as the alternative to Internet Explorer. Both CiviSpace and Drupal were working in tandem working on the project success. CiviSpace agreed to do all the development on Drupal basis, for instance, to synchronize releases, centralize bug reports, submit patches upstream, or share documentation. That was the cause of Drupal distribution support.

Going on with the Drupal distributions, its major principle and vision of future development is based on the sparking desire of web specialists to create ready-made ad-ons that would be of avail to every Drupal user. Gaining the crucial mission of creating the content management framework  for everyone, Drupal is constantly becoming even more and more user friendly.

All in all, Drupal is always encouraging its users to distribute and share and in this way the Drupal abilities are more than enough. With the every new version release we may retrace how significantly and rapidly Drupal is improving and growing. Because of the strict principles and missions planned, this content management framework became the pleasant solution for huge website, great enterprises, and significant networking communities.

Traditionally, the seventh day is the pastime. So, let’s take a look of what has been done! Drupal is a content management framework of U.S Whitehouse, UK Government, is the basis of Harry Potter website, Greenpeace UK, etc. Actually, the list is almost endless, plus a number of Drupal websites are increasing with velocity speed. It’s nice be a part of such a community, isn’t it?

P.S. Migrate to Drupal in a few clicks with aisite and become a part of the great history!